One of the most radical experiences at ISTC takes place at our Waterfront area. For those who have been to ISTC before, your mind probably jumped right to banana boating, which is truly a great time. However, I wanted to put the spotlight on another feature that is equally as awesome, the Blob! 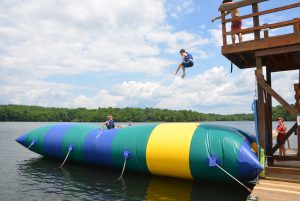 If you have never been in the Blob’s presence before, it is a large rectangular shaped float that allows a camper to soar through the air and land with a massive splash in the lake. This cool result is achieved by having one camper sit on the very end, otherwise known as “the blobber”, while a second camper, “the jumper”, takes a leap onto the opposite side. The effect is like a seesaw, the jumper comes down, the blobber goes up, and everyone on the beach gets to witness the spectacle of someone floating through the air for those brief seconds. 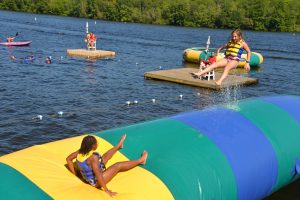 Many of you reading this may be incredibly excited and ready to give the Blob a go. On the other hand, I also understand that there may be some who cringe at the thought of getting launched into the air, wearing nothing but a life vest; and to be perfectly honest, that’s okay. It’s normal to feel nervous when faced with something new and potentially fearsome. Counseling the past two summers at ISTC and working with campers to overcome their fear of the Blob, I have discovered that this simple float can have one of the most lasting impacts on campers, which I like to call “The Blob Effect”.

While the Blob may just be a float in the water, it exemplifies the notion of leaving comfortable ground to experience something out of the ordinary. The Blob reinforces the idea of putting yourself in a temporarily uncomfortable position to reap the benefits of something new. It teaches campers that everything in life may not be the best on first impression, but fully immersing and sticking with the process may uncover an interest or leave you with impactful experience. From afar, the Blob simply launches campers into the air but at its core, it instills “The Blob Effect” – a newfound sense of open-mindedness that will change their outlook on all new situations. 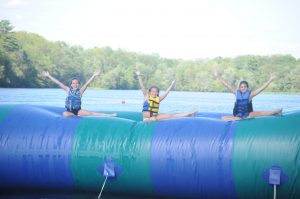 All campers come to ISTC with a suitcase. Of course it is filled with the all of their things but also the culmination of experiences that they have undergone. “The Blob Effect” is a constant reminder to always leave a little room in your luggage since you never know what you might bring back from your stay. There’s no denying that ISTC introduces campers to situations they have never faced before; however, with the Blob Effect at work, our campers are encouraged to sink in so that they can launch themselves to new heights and understandings.